If you’ve been anywhere near a transfusion service, or ordered blood components from one, you know that granulocyte products are special. Along with looking different (imagine a platelet bag, but a cloudier, bloodier one) and being transfused differently (within 24 hours of collection), they are a labor-intensive component for all involved in the process of transfusing them, from donor to patient.

Here are 9 essential things you may not know about granulocytes, a specialty transfusion product that is often a mystery to those involved in collecting and transfusing it.

1. We aren’t totally sure that granulocytes actually work!

In the nearly half-century that granulocyte concentrates have been transfused, numerous retrospective articles, case reports, and small series studies about granulocytes have been published. If you ask hematology-oncology docs, you will find a general consensus that granulocytes can be effective (including some really cool, almost miraculous-sounding stories!). Sadly, stories are not evidence, but the lack of evidence is not at all for lack of trying! Unfortunately for researchers, it is difficult to gather enough patient cases in statistically significant numbers to draw conclusions about the efficacy of granulocyte transfusion. For example, the “RING Study” (Resolving Infection in people with Neutropenia with Granulocytes) began in 2008 and was designed to gather evidence by randomizing eligible recipients into two groups: One that received granulocytes and one that did not. Unfortunately, the study failed to gather enough participants before closing in 2013 to be truly meaningful (though the data that was gathered did not show a substantial beneficial effect, according to data presented at the 2014 American Society of Hematology Annual Meeting). 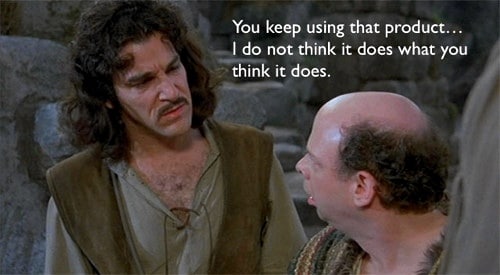 So, does this mean that granulocyte transfusions are a waste of time? Not from my perspective! It is very important to understand that granulocytes are often a last-ditch effort to gain control of a dire situation in an extremely ill patient; so expecting miraculous outcomes is not reasonable. Further analysis of the RING Study data DID show some benefit in patients who received significant quantities of granulocytes with each dose (see later). In my opinion, in limited settings, higher doses of granulocytes have value.

Modern granulocyte collections are a multiple day process. Historically in the United States, granulocytes were collected by apheresis either from “walk-in” unstimulated donors (more common) or from donors given a single dose of oral steroids to increase their white blood cell count. The unstimulated collections resulted in a product with a total granulocyte count of about 1.0 x 1010 (Test tip: 1.0 x 1010 is the minimum requirement in at least 75% of collections, according to AABB Standards, and it’s a GREAT number to remember if you are studying for an exam!). However, if we have learned anything about granulocytes, we know that the minimum quantity to meet the standard just isn’t enough to affect a positive outcome in a neutropenic patient! This was shown in the analysis of the RING Study data mentioned above.

A “modern” granulocyte concentrate in the United States is collected by apheresis from a donor stimulated the day before collection with an injection of Granulocyte Colony Stimulating Factor (“G-CSF”), in some cases supplemented by an oral dose of steroids (typically dexamethasone). This regimen typically results in a product with a yield of 4.0 x 1010 granulocytes or more. So, granulocyte donation is a two-day process for a donor and collection staff.

NOTE: G-CSF is not FDA-approved for use in stimulating granulocyte donors, so most blood centers have a formal informed consent process prior to administering the injection “off-label.”

As an aside, granulocytes may be produced in different ways outside of the U.S. The United Kingdom, in particular, does not permit G-CSF or steroid stimulation of granulocyte donors that are not family or friends of the patient. As a result, non-family member UK granulocyte products are produced from pooled buffy coats from ten random donors, with a yield of approximately 1.0 x 1010 granulocytes.

These collections require lots of extra effort by numerous people (including our donors!), which leads us to number three…

Granulocyte collections should not be begun carelessly. While there is no universally agreed-upon set of conditions, granulocytes are most commonly utilized in one of the following clinical situations:

For the first three indications, most patients will receive a “course” of treatment that includes at least 5-7 daily or near-daily granulocyte transfusions. Of course, not everyone in one of those situations will or should receive granulocytes. Instead, we are looking for some specific clinical and laboratory findings before agreeing to start the granulocyte collection process, especially in the first three groups of patients on the list above. Here’s what we like to see:

Traditionally, blood bankers have strongly resisted “prophylactic” granulocyte transfusions (for immunosuppressed patients without current evidence of infection but at high risk of acquiring one) or use in fever of unknown origin. There has been some debate about this recently, but most still believe (as do I) that granulocytes should only be given for patients who have an infection.

If you have never seen a granulocyte product, you might guess that granulocyte and platelet concentrates look alike, since both cells reside in the “buffy coat” and both are collected in the U.S. primarily by apheresis technology. Though logical, your guess would be wrong! Apheresis granulocyte units typically contain between 30 and 50 mL of RBCs, because it is essentially impossible to get a good granulocyte yield without harvesting some RBCs as well (they are immediately adjacent to each other by density separation in the apheresis machine). 30-50 mL sounds like a small amount, but that quantity makes the granulocyte product look almost as “red” as a unit of RBCs! (see images below) 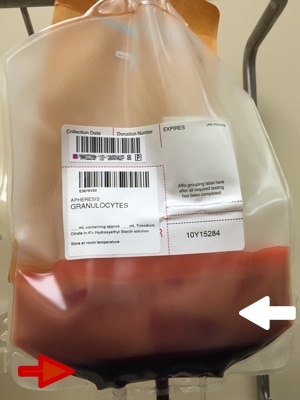 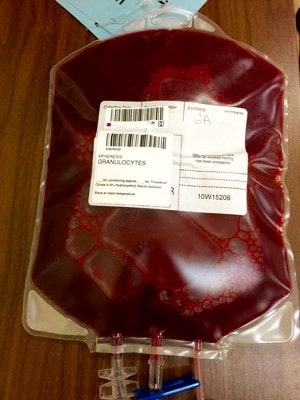 Notice how the same 30 mL that makes the bottom of the bag look red during collection (figure 1) makes the whole bag look REALLY red after mixing (figure 2)!

5. Granulocyte products are only stored for 24 hours

Granulocytes have pretty much the shortest shelf life of any product that we collect directly from donors. They should be transfused “as soon as possible” after collection, but definitely within 24 hours of collection. They are stored at room temperature, like platelets, but they should not be continuously agitated, unlike platelets. This out-of-the-ordinary storage is another reason that granulocytes are only collected on an “as-needed” basis. If the patient they are ordered and collected for doesn’t use them, there is very little likelihood they will be usable by any other patient during their short shelf-life.

6. No test results? No problem!

Because of the short shelf-life issue above, granulocytes are almost always issued prior to the availability of infectious disease screening results! Don’t freak out, we don’t just ignore the possibility of infectious disease. Blood centers will typically recruit unrelated apheresis granulocyte donors from recent apheresis platelet donors who have had negative results on a donation within the previous 30 days. We still perform the testing, of course, but the results just aren’t available in most cases before the product has to be transfused. This is an added risk, yes, but the time required for current infectious disease testing necessitates it. Ordering physicians are typically required to formally acknowledge that the product is being transfused prior to the test result availability.

Blood bankers must remember which modifications CAN and CAN’T be performed on granulocytes.

First, granulocytes CAN (and must) be irradiated to prevent Transfusion-associated Graft vs Host Disease (TA-GVHD). This is an extremely fresh product, full of highly active T-lymphocytes in addition to the granulocytes, and the recipient is immunocompromised, by definition. As a result, irradiation is essential to deactivate those donor T-lymphocytes and protect the patient from TA-GVHD (see figure 3 below). Note that the dosage of irradiation used in the U.S. (2500 cGy targeted to the center of the bag) will deactivate the T-lymphocytes, but will NOT impact the function of the granulocytes significantly. For more on TA-GVHD and irradiation, see the video on irradiation of blood products elsewhere on this site. 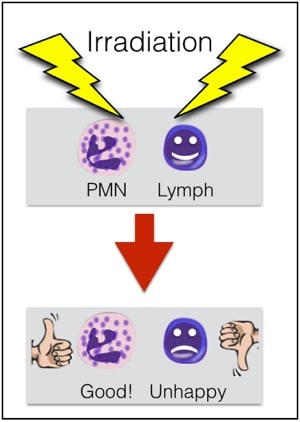 Figure 3; Irradiation is needed for granulocytes

Second, granulocytes CAN’T be leukocyte-reduced. Every now and then, people will ask me about leukoreducing granulocytes for prevention of Cytomegalovirus (CMV) transmission from a CMV-positive donor. Rather than make fun of them, I usually just sit quietly while they work it out themselves (“OK, let’s see: granulocytes are WBCs, or ‘leukocytes,’ so if I leukocyte-reduce a unit of a product that is primarily composed of leukocytes, I would be left with…nothing! OHHHH!”). As a result of our inability to make a granulocyte product “CMV-safe” by leukoreduction, CMV-seronegative donors will be recruited to provide products for CMV-seronegative patients whenever possible. Note that it is totally fine to run granulocyte concentrate through a “standard” transfusion filter, just not a leukocyte reduction or microaggregate filter. 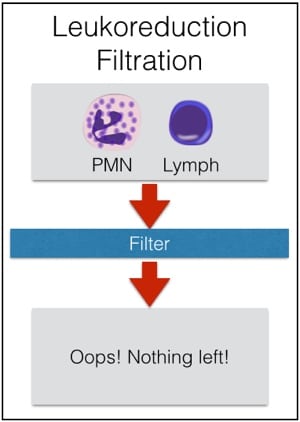 Irradiation is not only OK for granulocyte concentrate, it is essential! Leukocyte reduction, on the other hand, makes no sense for granulocytes, and shouldn’t be done.

Granulocytes are famous for causing transfusion reactions much more often than other components. The two issues that are seen most often are fever and chills (without hemolysis) and pulmonary reactions. I won’t discuss the self-explanatory fever and chills issue, but the pulmonary reactions are worth mentioning here. Considering that current thought suggests that neutrophils are the primary cell involved in the pathogenesis of Transfusion-related Acute Lung Injury (TRALI), it is not surprising that granulocyte transfusions are thought to cause pulmonary compromise quite often (5% in one study). Granulocytes LOVE the lungs, and they localize there very quickly (especially when the infection being treated is pneumonia). So, even if full-blown TRALI does not occur (which certainly CAN happen!), granulocyte transfusions are notorious for at least transient pulmonary compromise. Clinicians should be prepared to manage dyspnea and hypoxia during granulocyte transfusion, and certainly, full-blown TRALI can occur, as well.

Note that the previously suggested “link” between more pulmonary reactions when granulocytes were given with the antifungal Amphotericin B seems to be disproven (though many still advise avoiding transfusing granulocytes within a few hours of administration of that medication). As mentioned in point 4, TA-GVHD is a risk for a fresh product, so irradiation is required. Further, HLA alloummunization can certainly occur as a result of granulocyte transfusion.

What does it all mean?

There is no question in my mind that granulocytes CAN, in some circumstances, appear to make a difference for patients. Unfortunately, there’s not a lot of objective proof that they are a predictably helpful treatment. However, given our current ability to collect granulocyte products with substantially higher yields than in years past, I expect that interest in this product will continue despite the lack of “proof” of its effectiveness. And in the meantime, between now and (hopefully) the objective evidence we will amass into the future, I hope this list of granulocyte facts will keep you from responding, “Granny-what?!?” the next time this unusual, special product is ordered.

A previous discussion on this topic was originally posted on the previous version of the BBGuy site (as well as on ASCP’s “Lablogatory”) in 2015. This post was updated and modified July 1, 2016. 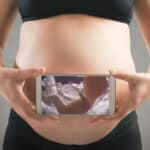 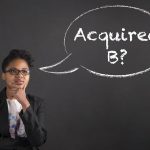