TEG is a technology that allows rapid analysis of whole blood clotting properties and assesses a patient’s overall coagulation status. TEG, along with ROTEM, is part of an overall effort to more rapidly evaluate bleeding patients (especially in the operating room and emergency department) to target the specific cause of their bleeding (please see the ROTEM entry for a discussion of the differences between TEG and ROTEM technology). TEG is performed on point-of-care instruments either in a clinical area (operating room most commonly) or in the laboratory, and a real time “tracing” is generated that helps guide potential transfusion therapy (see below). 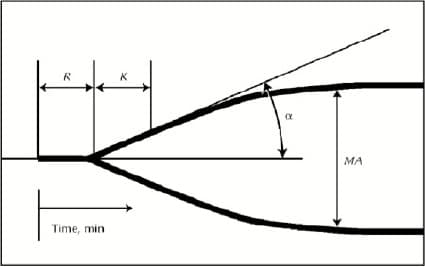 Some of the components involved in the interpretation of a typical TEG tracing include:

Use of TEG has been shown to decrease transfusion substantially in appropriate clinical settings.