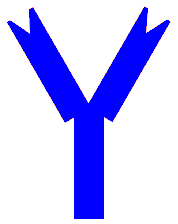 IgG (“Immunoglobulin G”) is the most abundant antibody in circulation. It is composed of a single antibody molecule that has two antigen binding sites (think of them as “arms”). IgG is traditionally illustrated in a simple fashion with a Y-shaped figure (the two arms of the “Y” are the binding regions and the base of the “Y” is the constant, or “Fc” portion). IgG is extremely important in blood banking because most clinically significant blood group antibodies are IgG (rather than IgM). IgG antibodies react well at body temperatures, and are transported readily across the placenta where they can target antigens on a baby’s red cells (Hemolytic Disease of the Fetus/Newborn). Typically, IgG antibodies will not directly agglutinate RBCs, and they often require an indirect or direct antiglobulin test to show that they are present on the surface of a red cell.